10 Facts You May Not Know About Your Breasts 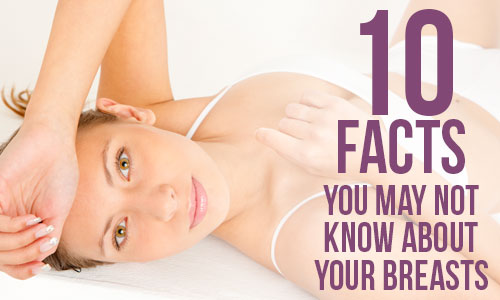 Just how much do you know about your breasts? You may be surprised by some of these facts about all things breasts, from bra sizes to breast implants.

Fact 1: The Bra Hasn’t Been Around As Long As Many People Think

Women were still using corsets until the early 1920s when Maidenform founders, Ida and William Rosenthal introduced the world to the bras and sizing measurements that we use today.

Fact 2: Your Breasts Move Around A Lot

The reason breast pain often occurs with exercise is because when you run, your breasts tend to move around in a figure-eight pattern and can travel up to eight inches in either direction. This is why it is always important to always wear proper support.

Lingerie retailer, Intimacy, conducted a survey earlier this year that found the most popular bra size is now a 34 double D, a huge jump from the average 34B just 20 years ago. While the rising popularity of breast implants may somewhat factor into this change, it may also be due to…

Fact 4: A Large Majority of Women Are Buying Bras That Are the Wrong Size

Intimacy’s study also found that 85 percent of these women are also wearing the wrong size bra, usually bigger than they need. There are professional bra fittings and at-home kits to help women find their proper cup size.

Fact 5: Breasts Come in a Very Wide Range of Sizes

When it comes to breasts, there is a great range of different sizes and shapes. In fact, the Guinness World Record for largest natural breasts belongs to New Yorker, Annie Hawkins-Turner. Turner’s chest-over-nipple measurement is five feet around!

Fact 6: It is Normal to Have Uneven Breasts

The majority of women have breasts that differ in size by a fifth of a cup size. Breast asymmetry is one of the top reasons for breast augmentation.

Fact 7: Breast Pain is an Issue for Many Women During Exercise

According to the British Journal of Sports Medicine, nearly one in three marathon runners experience breast pain. The chances are, if your breasts are a little larger, then exercise like running can be a difficult task. Many women seek out breast reduction to resolve these issues.

Fact 8: Breast Implants Have Been Tied to a Better Sex Life

According to a survey by RealSelf in 2012, 61 percent of women said that they were having more sex after receiving implants and 70 percent said that their sex-life satisfaction had improved as well.

Fact 9: The Majority of Women Are Unhappy With Their Breasts

The International Journal of Sexual Health states that about 70 percent of women do not like their breasts because of issues with size (too small or too big) or drooping/sagging.

Fact 10: Breast Augmentation is the Number 1 Cosmetic Surgery Procedure in the Country

With over 330,000 procedures performed in 2012, breast augmentation holds the number one spot in cosmetic surgery, with the breast lift, coming in at number five for females.