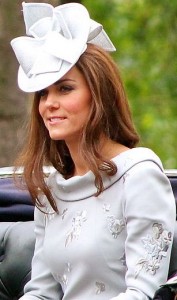 Kate Middleton’s recent pregnancy news isn’t the only thing making royal headlines right now. In fact, her nose might be even more newsworthy with fans, as it’s sparked a trend among women who wish to emulate the fashionable princess.

According to data recently released by the Transform Cosmetic Surgery Group, Kate Middleton’s nose was the most requested celebrity nose surgery of 2012 in the UK.

So just what is it about Kate’s nose that makes it a top choice among cosmetic surgery patients in the UK? Well, according to cosmetic surgeon Dr. Edward Miranda, Kate “has a nice angle between the upper lip and the nasal tip, with a minimal amount of visible nostril from both the front and the sides. It’s also proportionate to her face.”

Kate, who announced that she was pregnant earlier this month, also topped the list of most requested female celebrity look overall, beating out close runner-ups like Nicole Scherzinger, Cheryl Cole, Rosie Huntington-Whiteley and Myleene Klass, who rounded out the top five.

It’s important to note that women weren’t the only ones requesting celebrity-look-alike features  in the UK this year. The survey also revealed the most popular male celebrity features, which included Robert Pattinson’s jaw, Ashton Kutcher’s cheeks and Zac Efrno’s hair and eyes.

While it’s common and often helpful for patients to bring in a photo of their favorite celebrity nose (or other feature) during the consultation process, it’s important to always carry realistic expectations.

Cosmetic surgery can do a lot to improve your appearance, but it’s unlikely that it will make you look just like your favorite celebrity. The best patients for nose surgery or any cosmetic surgery procedure will desire to enhance their natural appearance, rather than completely transform it.