Would you accept free cosmetic surgery? in Maryland (MD) | by Will Surgical Arts

Would you accept free cosmetic surgery? 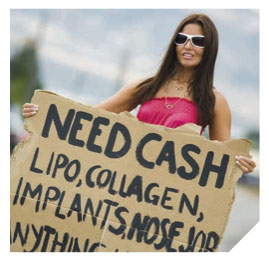 Interestingly enough, an independent survey in the UK indicates that most Brits would opt no, even if cosmetic surgery were entirely free of charge.

The survey, which was conducted by Fabriah.com, a beauty retailer that sells anti-aging skin care products (which may have swayed the results), polled 750 women in the UK. Of the 750 participants, 44 percent said they would say “yes” to free cosmetic surgery – but only if they knew the surgery would make them look younger or more attractive.

Opinions of Cosmetic Surgery Vary Across Age and Geographic Location

The results also indicated different levels of acceptance among age groups. By and large, the 18-30 year old group was thee most likely to consider surgery, while those over 55 were the least likely.

Additional factors, such as living in an urban or rural region also affected responses: urbanites were more likely to consider cosmetic surgery than those in the country.

Even though most participants said they’d prefer to age gracefully, the numbers (44 percent) still seem to support the belief that cosmetic surgery is slowly becoming the norm.

And because the study only surveyed women, it failed to take into account one of the fastest growing demographics in cosmetic surgery: aging men.

According to the British Association of Aesthetic Plastic Surgeons, male cosmetic surgery – which accounts for 10 percent of all surgery – is growing faster than ever. The rate of male breast reduction in particular, has doubled in the past five years.

Cosmetic surgery doesn’t seem to be going anywhere anytime soon. More than 9 million cosmetic procedures were performed in the US last year, according to the American Society for Aesthetic Plastic surgery, a one percent increase from the previous year.