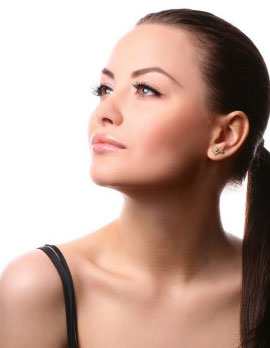 ATX-101, an injectable drug, reduces the amount of fat that develops under the chin (also called submental fat).

KYTHERA Biopharmaceuticals, maker of ATX-101, reported that 80% of participants in the study saw a significant reduction of fat under their chins after the first two years of the five-year trial.

“Treatment results with ATX-101 appear to be sustained and well-tolerated, which illustrates its potential as a novel, non-surgical approach to reducing submental fat,” said Kevin C. Smith, a dermatologist in Canada and an investigator in the Phase 2A and long-term follow up studies.

ATX-101 is a formulation of deoxycholate, which is a natural compound that breaks down dietary fat. The procedure is done over several sessions, during which the patient gets around 50 small injections of the treatment into the chin area. The injections work to eliminate fat under the skin’s surface.

“While these results are still preliminary, they support our expectation that ATX-101 may result in a long-term aesthetic correction,” said KYTHERA’s chief medical officer Patricia Walker, MD, PhD. “We look forward to continuing to follow these patients and to further characterizing the long-term safety and efficacy profile of ATX-101.”

ATX-101 needs FDA approval before it becomes an option for treating double chins. There are cosmetic surgical options for patients looking to reduce their double chins.

A lower facelift or neck lift targets the chin. During a lower facelift, the skin is lifted and removed as necessary to make the transition between the chin, neck and lower face more defined.

Neck liposuction is another surgical option for reducing a double chin and restoring definition to the lower face. Submental liposuction gets rid of the sagging, fatty tissue below the chin and is a less invasive option than a facelift.

Read more about the ATX-101 trials.