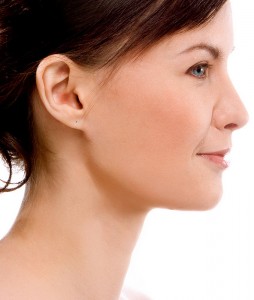 Advances in skin care have made it easier to age gracefully. So much so that it can be pretty hard to guess someone’s age these days – unless you know where to look. Below are four common problem areas and their corresponding cosmetic solutions.

The neck region is vulnerable to aging for a number of reasons. First off, it’s exposed to just as much sun as the face – which can be a major problem for those of us who don’t extend our SPF moisturizers to protect the neck. The skin on the neck is also thinner than facial skin and the muscles are weaker. This means less resilience and more sagging.

As we age, the skin our face gradually begins to loose elasticity and collagen content – this process can make the skin appear thinner and more wrinkled. Crepey skin is most often found around the eyes, cheeks and neck. Symptoms can be accelerated by sun damage, smoking, dehydration and environmental factors.

Similar to the neck, the hands are often subject to a lot of sun exposure because most people don’t cover them with UV protection on a daily basis. Years of excessive sun exposure combined with the normal effects of gravity and aging can cause your hands to appear wrinkled, sunken and freckled.

Aging and a loss of skin elasticity often lead to sagging skin around the face. Jowls, which can be described as sagging cheeks and a softening jawline, are often the beginnings of a double chin. As a result, they’re one of the most common reasons given for first-time cosmetic surgery consults.